Pardon the long post.  I had to tell the story!

I bought this wonderful kit in 1997 at our now-defunct Bridgetown hobbies.  The hobby show closed a number of years back and is now a place to buy weed.  I think it cost me $27.00.  I took it home and with the help of a Verlinden Fw-190 detail set started it right away.

The Verlinden set has a bunch of great details.  Tail and fuselage hatches, wing guns, cockpit details, and a way to cut a hatch on the kit and show what appears to be a partial look at the engine.   I didn’t want to have a partial engine and started a quest to find a 1/48 scale BMW-801 and found one in the CMK variety.  The one thing I would discover later is that the CMK kit does not have exhaust pipes.  (More on this later)

This first part of the kit through building the cockpit, hatches, and adding the wings went pretty quick.  A tip here is that for DML Fw-190s you should glue the top halves of the wings to the fuselage first and then add the lower wing.  It goes together without the need for gap filing much better.

So now I reach my first dilemma which causes me to put the kit away for a while, how do I mount the engine.  The CMK kit provides a wonderful engine ring mount but no supports back to the main body of the aircraft.  Once I got the kit back out I developed my own which are the results of these previous post.

I basically studied drawings of the kit and out of brass tube soldered my own engine mounts.  Thes next 4 links go back to 2013 and my effort to make engine mounts.

Now that I had an engine and I had engine mounts the next dilemma, no exhaust pipes on the CMK kit.  The Fw-190 went on the shelf while I tried to figure out a good source for exhausts or drawings.

Then in the last couple of years, Eduard has released a set of Fw-190 kits that included engines with exhausts.  Purchasing one of these kits to copy the exhausts caused me to get the kit back out and then  I discovered Rexx exhausts for the Fw-190 and sought to procure a set of these.  They were designed to copy the Eduard exhausts and I thought I had my problems all solved.

I was wrong!  As I started working with the engine to place it on the mounts, on the aircraft, so that I could assign the exhaust I begin to sense that either the engine or the aircraft was out of scale; the engine was too big for the front of the DML kit.  Given the original plan was to cut away most of the forward panels on the aircraft I was seeing the engine would not even fit within the few panels I had remaining. 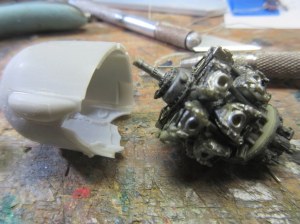 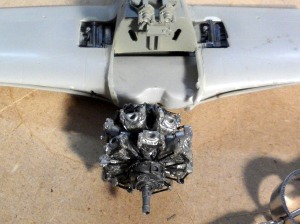 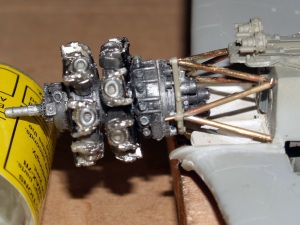 Now, 22 years from the start of the kit, I had to make a command decision.  I would finish the kit without the engine.  But what to do with all of the Verlinden pieces in place and the other panels I had cut open?

I used the back of the CMK engine and made a stump of an engine to go on my engine mounts, then cemented the front of the engine compartment onto the fuselage with the stump in it.  I ran some wires from the fuselage to the stump to represent control wires top make the space under the fuselage guns look a bit busier. 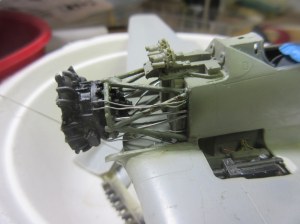 After adding the front of the aircraft back on I proceeded to complete the kit.  It was airbrushed with Vallejo acrylics, weathered with and oil dot weathering, and grubbed up with pastels.

I had to place the DML decals in the window to remove a bit of their yellowing but was totally amazed how well the 20+-year-old decals went on the kit and settled down with a bit of Solvaset.

I am very pleased I got this kit done.  It is a busy kit, lots of things open, and most of it open for many years!