I started my next round of century series.  I can’t seem to get away from modeling them in 1/48 scale.  This one step away from the previous run in that it is a two seater, it is NOT a Monogram kit, and it is not in US markings.  Here is a previous view from an earlier post, all Monogram, all single seat 1/48 scale.

For this one I picked a Canadian CF-104D two-seater my bride gave me for a present a few years back.  Many years ago (50ish) I built (more like slapped together) this amazing chrome plated F-104 from Hawk.  It still rests in my mind as one of the turning points in my interest in military aviation; I am still in awe of this aircraft today.

I built this kit in US markings but always thought the red and silver with the old maple leaf markings were something I wanted.  And so here we are. 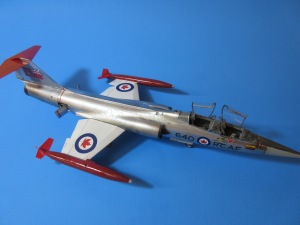 The kit wasn’t what I would consider up to Hasegawa’s quality.  There were a number of ejection marks not only on landing gear stuff but also on things like the separate rudder and flaps that needed to be sanded.  While fit was pretty good there were a few places that required a bit more effort that I am used to for a shake ‘n bake kit.  No grumbling, just alerting you to the fact you’ll have to do some modeling.

On the other had, the engineering is well thought out and there are separate trees for the dual seat version.

I used the Combat Series TF-104G cockpit.  I’m not sure if it is accurate for the Canadian version but I am in the who cares age of modeling; as long as it looks good and fits those details don’t bother me much.

Next up are going to be a Trumpeter F-100F and a Monogram F-105G.  Both done in Nam markings.  I am surprised that none of my completed shelf stock have any of these markings since I was heavy into modeling during that time as a teen.

Here are a couple of parting shots from the build. 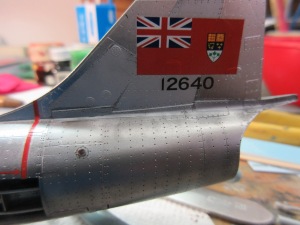 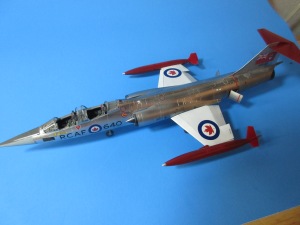 Spent the evening preparing the F-84 for a NMF finish.

First, oversprayed the area I sanded with Mr. Surfacer 1000.  If you’ve never used this it’s sort of a filler for sanding marks and it provides enough surface thickness to fill in light sanded areas.  I then cover the whole aircraft with a thin coat of Alclads grey primer.  As you can see from this shot it does a good job getting the surface ready for the finish; no sanding marks are left 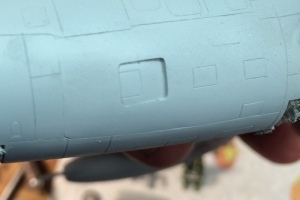 If you didn’t have the first picture I’d challenge you to see where that odd side panel was glued in and sanded.

The circular nose intake finished up really well too and the rest of the evening was spent masking the canopy.  This one was a tough one, lots of panels.  It seem this “bubble” canopy has more panels than the P-61 I just finished.  I usually use Parafilm but thought I would try vinyl tape and micro mask this time. 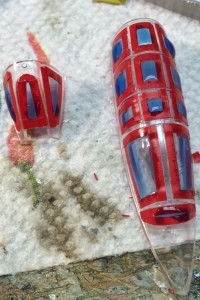 Ah some more time to progress.

A few nights back I got some progress made.  I’m building with a young man about 22 years old who was one of my Eagle Scouts when I was scoutmaster of a fairly large troop.  Of the hundreds of young men I have known through scouting he’s the only one who shares my hobby.  He’s going to Colorado after the end of the summer so I’m trying to impart as many concepts as I can and hopefully send him into the world with a greater appreciation for modelling than a tube of glue and a box of styrene.  He’s building a 1/72 B-17 and I’ll try to get a few shots of it as he goes!

On top of the progress made earlier, I’ve primed the model for a last check for issues (and I have a few).  In my haste to get the primer on I realized that I didn’t sand the wing seams after gluing so I will have to go back and touch those up.  But she’s mostly ready for ADC gray.

I don’t know if I mentioned in a previous post but I built all of the Monogram 1/48 scale century series and the F-4 is really an extension of those (F-110).  I’ve been collecting the F-XX series jets 1/48 scale (F-84/86/89/95/96) to continue the line sometime after I get this one done.  Seem to have a passion for rescribing Monogram jets.

Here’s a couple of shots.  I use Alclad Primer now in most cases, with a shot of Mr. Surfacer 500 in some cases (but not on this kit). 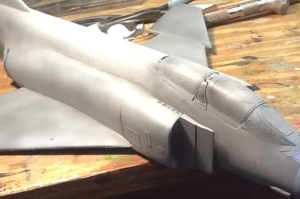 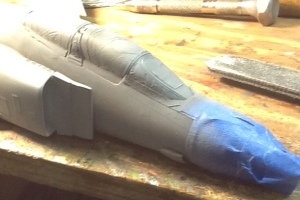