I finished the two desert aircraft just under the 2018 clock.  This makes only five models for me this year, off my normal of about 7 – 8.

The Hasegawa Cardoor Typhoon was finished in a rare desert scheme which required I paint a Skyblue “Y” and find other decals.  The serial number isn’t correct for this Typhoon and I was too cheap to go buy the decals needed to just have the serial number.  I think the British desert scheme turned out very nicely.  Vallejo paints with a final overcoat of Testors Dull coat after oil dot weathering and pastels.

The A-20 is the AMT kit built as a “-C”.  The markings are based on those found in an A-20 book I have and finally replicated by FCM in their new decal sheet.  Paints are all Model Master with the exception of a jar of Floquil Military Colors (Desert Sand) I have had on the shelf for 10+ years waiting to do this scheme.

Here are the photos of the Typhoon and A-20. 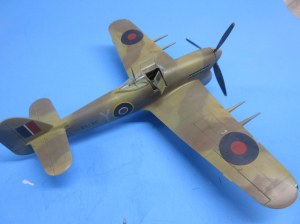 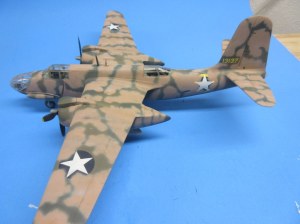 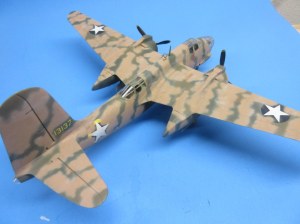 What I learned in these builds….

Finally, here is the other part of the 2018 set of completions.  See you next year; 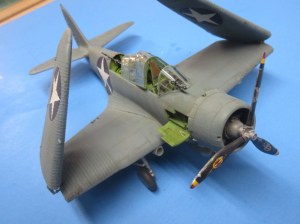 In conjunction with the Typhoon (previous post), I have been working on painting a desert A-20 Havoc.

The camouflage and markings are what I once heard called reverse lend-lease.  When the US got into the war we took back a few of the A-20s we gave to the British.

The camo starts with the standard British Euro bomber colors.  This is in contrast to the normal British desert colors used on the Typhoon in the previous post.  Instead of Middle Stone / Dark Earth / Azure used on the desert aircraft, the initial colors are Dark Green / Dark Earth / Medium Sea Gray.

When the US took back the A-20s for use in the desert they quickly applied their markings and did a hurry-up camo job to get it desert ready. 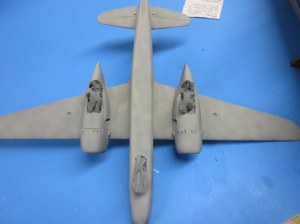 The decals from FCM (48051) represent the British marking with US stars and serial numbers painted over the British roundels.  The US then oversprayed the whole aircraft with desert sand including parts of the roundels.  The markings represent the markings on the old Revell 1/72 A-20 and I have been waiting to do this in 1/48 for a long time.  I’m glad FCM created the decals as I was prepared to roll my own and I have even had a jar of desert pink on hand that was never opened until now. 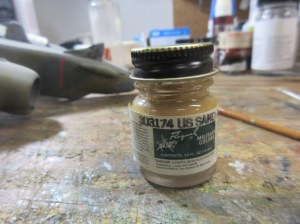 I spent a couple of hours this afternoon overspraying the A-20.  After it dries we will be onto a coat of future and weathering.

I finished painting the Typhoon.   I’ve been trying to push the end of the year builds so anything that might show up under the tree can be fair game to get started.

I used a combination of things I haven’t tried before; Blu-tack for masking the color boundaries and Vallejo Model Air paint.

The blu-tack is rolled out into long strings and flattened.  It is then pressed onto the aircraft as a masking guide for the paint.  As you paint along the edge of the blu-tack it forms a soft edge camo separation from the other colors.  I used this very effectively on an F-21 Kfir I built a few years back.  You can see the article here

This time the results were not as easy as the blu-tack and the Vallejo reacted by leaving a lot of residues which discolored the Vallejo.  You can see the process and the results in these photos… 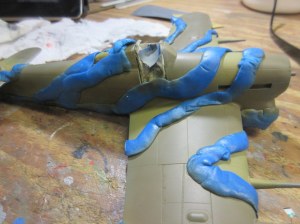 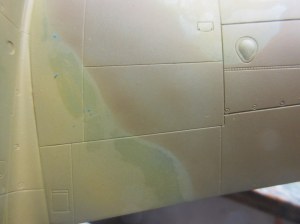 After fiddling around with it I found good old mineral spirits were able to take the residue away but also removed a small amount of paint which showed through to primer where the paint was thin.

As a good side effect (which I’ll remember) is rubbing down the Vallejo paint job with mineral spirits gave it a nice faded look.  I might use this as a weathering step in the future.

The kit is now ready for a shot of future and decals.

A quick update on the Typhoon.  (Lots of modeling done this weekend) This is a continuation from post https://wp.me/p3DBTC-iI

I put the primer in and I have started painting (more on that in next posts).

I have been using Dupli-color automotive primer.

Normally I decant it (spray it into a cup) then use my airbrush.  Sometimes this process results in the primer going on way to dry and grainy and in the last set of kits I built this required additional sanding to take out the graininess.

This time I decided what the heck I’ll just spray the primer on straight from the can and Wow! what a nice coat.  Goes on thin and dries very smooth – just waiting for paint.  No need for sanding this time. 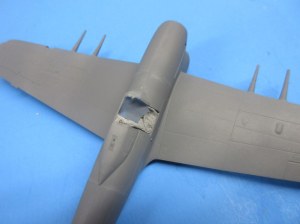 Next, me, Mr. Iwata, and Mr. Vallejo get together for some color!

This is  a continuation from a previous post which can be referenced here https://wp.me/p3DBTC-iP

The A-20 build continues.  I am at the point where I need to fill the seams and prime.  Although this kit went together well there were a few areas the needed attention

In order to get the nose section to fit the rear section, I needed to glue each respective nose piece to its side of the fuselage.  This allows you to align the parts together. 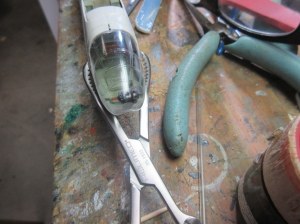 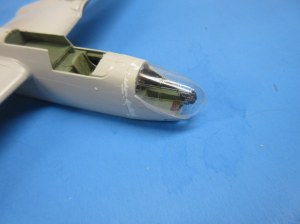 I use Milliput medium grade putty.  Mix the two pieces together, apply, take a cotton swab with water and smooth it out, and some light sanding at the end.  The application with the cotton swab has made it very easy to get the putty into the places it needs to be without having to do a lot of sanding later.  If you look at where the vertical joins the horizontal in this picture you can see a light bit of putty pressed in and smoothed over with a cotton swab.

Finally had to put the gear together before I could add the nacelles which will require some masking over the gear when painting.  The gear is very intricate and looks nice once the nacelles are on.  There isn’t much else inside the nacelles unless you want to pop for Eduards A-20 interior set.

Next lots of transparency masking.

Finally with a weekend to do some modeling I also started assembling the AMT A-20C.  Not quite the shake and bake of the 1/48 Hasegawa in the previous post.

This one will need more gaps filled but overall the fuselage assembly didn’t cause me a lot of concern.

The biggest issue I need to hurdle is where the front end meets the bombardier’s glass.  As you can see from the photos  I have a gap to fill on top and there will be some sanding/filling required for the side joints.  You can see that the glass has less width than the fuselage it will join and I will need to work out thinning the side to get it closer to the glass.

In this build, the strategy was to add the nose sections to their respective sides and then glue the fuselage together.  The next time I do this (I still have an A-20J to build) the right way might be to get the glass and side aligned together then put it onto the fuselage.  I would think sanding and filling the nose to fuselage joint would be easier than the glass joint. 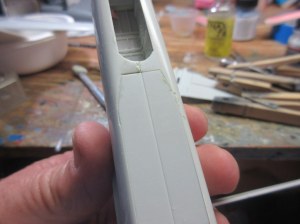 You can see that there will be some filling and sanding that needs to be done in the next steps.

Put most of the Hasegawa Typhoon together.  I forgot that when you are building a single-engine 1/48 fighter how fast the main parts come together.

The Typhoon was engineered by Hasegawa to support many different version of the fuselage and as such there are a number of inserts that get added to the completed fuselage so that it can be a car door Typhoon.  As well as I  tried I will have a small bit of filing to do to smooth these out.  You can see by the photos of those areas. 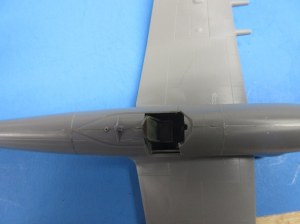 I assembled the wings using an old trick I learned for the DML (Dragon) Fw-190 kits; glue the wing root of the upper wing half to the fuselage and then glue the wings together.  If I had done the instruction way, assemble wing then add to fuselage, I would have had a gap at the root.

Note that the cannon bases in the wing were also split and will require some cleanup as we move along. 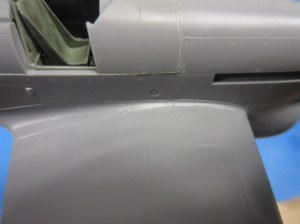 Overall doesn’t look like too much work for out of the box.  Next post we will go back to the AMT A-20 which is quite another story.

Time to start a couple of desert aircraft. 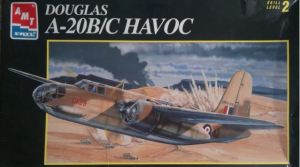 Time is ticking for completing kits this year and although I’m not a really focused by quantity I haven’t built very many this year so we’ll do a couple of kits mostly out of the box.  I’m going to try and keep the AMS (Advanced Modelers Syndrome) down a bit.

I’ve always wanted to do the camouflage on the old Revell A-20 kit, the reverse lend-lease aircraft that was in British desert camo with stars painted over the British Roundels and the aircraft oversprayed with desert pink.  I’ve has a bottle of fresh desert pink paint for over 15 years waiting for the day.

With the release of the new FCM decals for the A-20, I can finally take my AMT A-20C and create this in 1/48 scale.  Note that there is a picture in the Douglas Havoc and Boston book (Crowood Aviation Series: ISBN 1 86126 670 7) on page 122 showing the US aircraft on this sheet together.

I am building the A-20 right out of the box (with the exception of the exhausts – for another post).  Cockpit, bombers position, and rear gunner areas will be presentable as I plan to keep the canopies closed and you won’t see much. 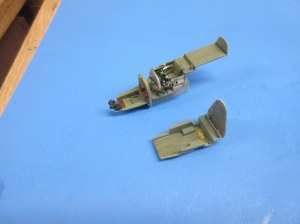 The AMT kit has a separate nose front so that the same kit can support the A-20B/C/G/J versions.  I have cemented the nose to the fuselage half rather than following the instructions which had you cement the nose halves together first.  This is recommended as it really helped align the bombers positions in the aircraft.

Interiors are painted Floquil British interior green from an old bottle I’ve also had hanging around for many years.  (I miss those colors).  Details were hand painted and we are about ready to start closing up the fuselage.

I’ve also started the Hasegawa car door Typhoon.  Apparently there were only three Typhoons used as test aircraft in the desert theater and I plan to mark up one of them with those markings.  There are a few decals sheets out there with those markings but I might see if I can cobble together the correct markings from spare decals on hand.

The cockpit is simple and ready to implant in the Typhoon’s fuselage as well. 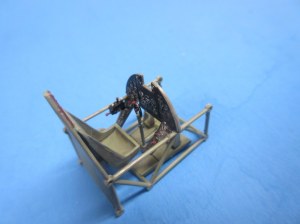 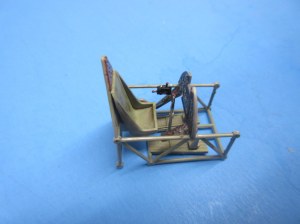 Next, closing them up!